President Abdel Fattah Al-Sisi, on June 21, announced a number of measures to be undertaken to strengthen social safety nets and protect the poor from inflation as reform momentum continues.

Monthly food subsidy allowances are expected to be raised to E£50, starting from July 1, which is more than double the previous monthly allowance of E£21.

There are approximately 70 million food subsidy card holders in Egypt in a population of just under 95 million people.

The increase in allowances, along with other measures, is expected to push the food subsidy bill up to E£85bn during the 2017/18 fiscal year (FY).

According to the International Monetary Fund (IMF), food subsidies were previously estimated at E£51bn for the 2017/18 FY, reflecting a 67% expected increase in food subsidy expenditure.

Furthermore, existing social programmes, covering an estimated 15 million Egyptian households of Takaful (focused on child development through education and healthcare related cash transfers) and Karama (involving cash transfers for social inclusion among the elderly and disabled) are expected to be expanded.

The president announced that the monthly allowance of the social programmes will be raised by E£100 to a total cost of E£8.25bn in the 2017/18 FY, according to the governments estimations.

Apart from higher food subsidies, the Egyptian government announced further measures to combat recent economic hardships, including raising state pension benefits by 15% (amounting to a cost of E£190bn) as well as increasing salaries of public workers by 7% p.a. under the Civil Service Act (approved in October) and by 10% p.a. for state staff not covered by the act.

On the revenue side, the government is expected to increase the minimum income tax threshold to E£7,200 p.a. in the trade and industrial sectors for self-employed people, from E£6,500 p.a. formerly.

Furthermore, tax breaks will be allowed for the first three income tax brackets, which is aimed at providing lower income individuals with a higher tax break as shown in the accompanying table.

From a political perspective, the increase in subsidies and other social support measures comes as Mr Sisi’s popularity has witnessed a sharp decline.

The fall in his approval rating was not only due to the harsh economic environment, however, and it is unclear whether the move to improve the lot of the country’s poorest will be enough to boost his standing in the public’s opinion as elections next year grow nearer.

Last week, June 14, Parliament approved the ceding of two Red Sea islands to Saudi Arabia despite many the decision’s unpopularity.

Although protests against the move have been somewhat muted, it has surely turned many more voters against their increasingly authoritarian leader.

It is unlikely that Mr Sisi will count on popularity alone to win the elections (arresting opposition candidates and muzzling the press are other likely strategies), but we can expect him to try and win support through easing the effects of austerity and spending more as polling day approaches.

The Egyptian government’s efforts to strengthen social protection will be welcomed by citizens who have suffered a loss of purchasing power from the recent reforms.

The announced increase in food subsidies and expansion of the existing social programmes is larger than initially anticipated. 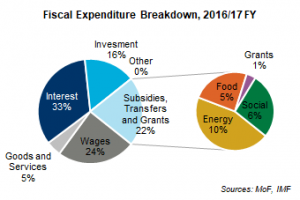 However, this is expected to have only a marginal impact on overall fiscal expenditure as the food subsidy bill is estimated at roughly 5% of total fiscal spending, while transfers account for approximately 6%.

In terms of the public sector wage bill, the government has made notable efforts in containing expenditure on public sector wages, which have increased by only 1.4% y-o-y over the first eight months of the current fiscal year.

As such, the proposed increase in state workers’ annual pay, albeit still below inflation, may induce some constraints in containing public sector wages further, as it accounts for some 24% of total expenditure.

While the government’s efforts to protect the poor through food subsidies and social protection is a welcome one for low-income Egyptians, combined with rising public sector salaries and pension funds, these measures may be suggestive of the government’s concerns over popularity as well as citizen discontent.

The protests over changes in bread subsidies in March gave the government a scare and were dealt with with unusual care by security forces.

Mr Sisi would not chance changes or cuts in the run up to an election. These recent developments bring a sense of how difficult it will be to narrow the budget deficit quickly.

The Egyptian government is expected to be dependent on multilateral organisations for years to come as the authorities flounder to strike the balance between narrowing the fiscal deficit without bringing too many people to their knees.

More in this category: Nigeria is going back in time with the new pension Bill »
back to top